The BBC cameras were at Bakewell Show and have shown footage of both Karen and Grenville.

At the first ever Horse Drawn Hearse Class Karen came second with her team of black horses and one of the black hearses, whilst Grenville drove her pair of dappled greys to a silver hearse and came fourth in the pairs section. One of our black hearses was also on display on the Co-op Funeral Care Trade Stand and we were kindly sponsored by J.W. & J. Mettam Ltd of Bakewell.

Karen has three horse drawn funerals in one day.

Karen will be going to Catton Horse Driving Trials on Thursday.

She will be driving the pony team, but will also take her own team to give the new young horse, Wilaan, a taste of the sight and sound of a driving trial.

She was unable to take her horse team as new boy, Blackie, has a paddock injury and will be out of work for a few weeks. The pony team went really well, despite ducking out at the water, but their dressage needs more work.

Karen will hopefully be entering two exhibits in this new class at the Bakewell Show, as long as business commitments permit.

She was only beaten by 0.5 of a penalty! The new carriage really helped and the ponies went really well. Karen is now going to work on their dressage before the next competition. See Competition page for results.

Karen is off to Hopetoun Horse Driving Trials this weekend.

Karen is travelling to Hopetoun this weekend to compete Ray’s pony team in the horse driving trials. We will publish the results early next week and hope to have some photos.

As Karen has not managed to put together a horse team for 2011, she will now be driving a pony team.

The two young horses Karen introduced to her horse team last year unfortunately did not work out and she now has two new young horses. As she wants to introduce them slowly, she will only be taking them to a few events for practice this year.

However, Ray Aziz has kindly offered her the drive of his pony team for the season, which she has enthusiastically accepted. Their first outing will hopefully be Ashfields. At least we don’t have to go out and buy a team of Shetlands, which is what we were threatening to do at the end of last season!

Funeral Horses sometimes have a day out doing something different. 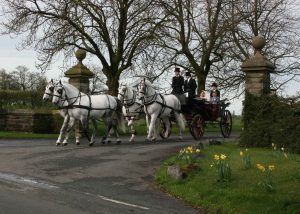 The funeral horses for our horse drawn hearse, Warwick and Windsor, had a fun day out in Lancashire yesterday. They were helping out at a wedding acting as team leaders with a wedding carriage. See gallery for photo.

We use cookie to improve your user experience. By continuing on this site you are agreeing to the use of cookies. Find out more.